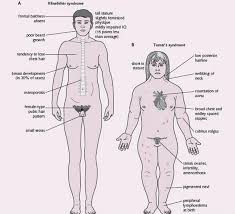 When does Hypogonadism occur?

Hypogonadism can happen at any age. Here’s some briefÂ explanations of what can occur and when:Â Â

In the Womb
The default sex of an embryo is female. Females have two X chromosomes (XX). Males have an X and a Y chromosome (XY). If a male sperm fertilizes an egg, then the baby will be male. However, if the sex chromosomes are damaged or the androgen hormones are inadequate to stimulate male development, then the child will be sexually ambiguous. When hypogonadism develops in theÂ fetus it can be hard to tellÂ if the genitals areÂ male or female (hermaphrodite).

The boy may be born with undescended testicles (cryptorchidism), or a tiny penis (micropenis), or may dribble urine through an opening on the bottom of his penis (hypospadias) instead of through a normal exit (urethral meatus) on the end of his glands.

If a girl develops hypogonadism when she is a fetusÂ it can go undetected until puberty, when she fails to develop.

Childhood
If a boy develops hypogonadism that goes unnoticed until age 4 or 5, then he probably hasÂ Klinefelter syndrome. In 25% of boys, there is a telltale condition called clinodactyly, where the little finger curves toward the ring finger because the middle bone is wedge-shaped instead of rectangular. He is likely taller than 75% of his classmates, with long, thin limbs, sparse body hair, and weak skeletal muscles. This appearance is called a eunuchoid body type.

The school-age boy with hypogonadism from Klinefelter syndrome probably has characteristic knock-knees (genu valgum), high arches (pes cavus), protruding lips, a projecting jaw (prognathism), and very widely-spaced eyes (hypertelorism). If he is Caucasian or Black, epicanthal skin folds on his upper eyelids at the inner corner give him an oriental look. He exhibits poor coordination because fused bones in his forearms make it difficult for him to rotate his arms (radioulnar synostosis). This boy has a quiet, tractable personality with occasional tantrums and aggression. About 5% of boys have a normal constitutional lag from an immature hypothalamus in the brain, which they eventually outgrow. Testosterone replacement therapy (TRT) can stimulate puberty in young boys.

If a girl has hypogonadism in childhood, the most likely cause is Turner syndrome. Symptoms of Turner SyndromeÂ include beingÂ very short, even as much asÂ 20 centimeters shorter than her peers). She may have very widely-spaced eyes with droopy eyelids, low-set ears, a webbed neck, and shield-shaped chest. Dry eyes and poor spatial perception, especially when reading maps, are also symptoms of Turner Syndrome. The girl may also have learning difficulties especially when it comes to mathematics. Doctors will suspect Turner syndrome if she has only one kidney, diabetes, thyroid deficiency, or heart problems with her bicuspid valve and aorta. Affected girls will not experience their first menstrual period (menarche), which is called primary amenorrhea, and is the most common reason girls seek treatment. Left untreated, the girl will only reach a height of 4 feet 7 inches (1.4 meters). Turnerâ€™s syndrome is also called monosomy X, gonadal dysgenesis, or Bonnevie-Ullrich syndrome.

Adolescence
If a young person develops hypogonadism, then he or she will be infertile and may be sexually dysfunctional. Be prepared for hypogonadism that results from cancer treatment, a secondary disease like diabetes, infections like mumps, or toxins like herbicides used on farms that run off into the water supply. Adolescents with hypogonadism appear much more immature than their peers.

Boys with adolescent-onset hypogonadism do not develop a beard, strong muscles, or voice deepening. They demonstrate low energy and show little interest in sex. Their sexual function is decreased and their genitals are smaller in comparison to other young men. They often develop female breasts (gynecomastia). Testosterone replacement therapy (TRT) can initiate their secondary sex characteristics and make them appear normal.

Girls with adolescent-onset hypogonadism experience a menarche (first menstrual period) but their cycles subsequently stop, which is secondary amenorrhea. Turner syndrome girls have a 1 in 4 or 1 in 5 chance of some spontaneous puberty. There are a few reports in the medical literature of women with mosaic Turner syndrome who conceive without in vitro fertilization. However, spontaneous puberty is more common in women with mosaicism, like Down syndrome, or an abnormal second X chromosome, such as 46,XXiq or 46,XXip. Girls with kidney or ovarian failure, liver disease, or hysterectomy, experience early menopause.

How many people have Hypogonadism?

Hypogonadism is not more prevalent in one race than another. Anyone can suffer from it.

Most males with primary hypogonadism have Klinefelter syndrome. One case occurs in every 500 to 1,000 live boys born. XYY syndrome is a major cause of hypogonadism, which occurs in one out of every 1,000 live births. It is a chromosomal abnormality affecting only boys, where one extra Y chromosome is present.

Most females with primary hypogonadism have Turner syndrome. One case occurs in every 2,500 to 10,000 live girls born. It is a chromosomal abnormality affecting only girls, where one X chromosome is missing.

Both male and female children can develop hypogonadism becauseÂ ofÂ Kallmanâ€™s syndrome (KS). It is also called hypogonadotropic hypogonadism. One in 10,000 males has KS. One in 50,000 females has KS. Kallmann syndrome is a mutated KAL gene on the X chromosome that causes disturbance of the hormone GnRH, which should be released by the hypothalamus in the brain to â€˜wake upâ€™ the ovaries and testes at puberty. The childâ€™s pituitary does not produce enough luteinizing hormone (LH) or follicle-stimulating hormone (FSH).

Boys may produce androgen hormones, but are resistant to their effects, and may have a small penis. Affected children may have no sense of smell at all (anosmia) or a very limited sense of smell (hyposmia). Kallmanâ€™s syndrome children are also likely to have hare lip (cleft lip), cleft palate, central deafness, and speech difficulties (dysarthria). They are likely to walk unsteadily and have high arches (pes cavus). They often exhibit uncoordinated muscle movements (cerebellar ataxia), or make involuntary movements automatically whenever they make purposeful movements (synkinesia), or have twitching eye movements (nystagmus). Often, they lack one or both kidneys (renal agenesis).

How dangerous is Hypogonadism?

Many fetuses with hypogonadism have renal agenesis (one or both kidneys are missing) and 10% to 33% of them will die in the uterus.

The death rate among children with hypogonadism is not increased. However, these children have a greatly increased chance of bone fractures from osteoporosis (brittle bones) and will be infertile. Their functioning may be impaired by heart problems, or lymphedema (swollen lymph glands), or only one kidney.

Both sexes have difficulty developing or maintaining their secondary sexual characteristics if they do not have adequate gonadal hormones. Delayed puberty means males and females will have difficulty fitting in with their peers because they look immature and childish. Adolescents with hypogonadism may benefit from counseling and a peer support group to avoid depression and potential substance abuse.

What is childhood Hypogonadism?

More on Hypogonadism in Children and adults

The information in this article has been taken with permission from the official Lawley booklet onÂ Childhood Hypogonadism.

What is childhood Hypogonadism?