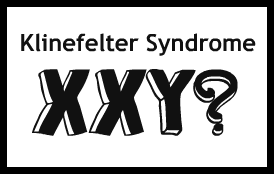 Did you know that 1 in every 500 men have Klinefelter syndrome? Chances are, you might not even know what Klinefelter’s is because, despite how prevalent it is and the fact that it’s the number one cause of infertility in men, it’s often not diagnosed until well into adulthood.

Here is some quick and helpful information to give you a quick rundown of what Klinefelter’s is, how it impacts the body, and the treatments available. Think you might have Klinefelter syndrome? Book an appointment with your doctor now.

Is it genetic?
No. The syndrome is not an inherited condition, but rather the extra sex chromosome shows up as a result of a random error after conception or during the formation of the egg or sperm. Note: Some research suggests that the risk of the syndrome could be higher in children born of older mothers.

Symptoms
The syndrome can impact testicular growth causing smaller than normal testicles and, as a result, can result in a low production of the sex hormone testosterone. In fact, many men produce little or no sperm at all. Klinefelter’s can also cause reduced muscle mass, reduced body and facial hair, as well as enlarged breast tissue, which can lead to a greater risk of breast cancer.

Diagnosis
Because it is not very well known, most with Klinefelter syndrome aren’t diagnosed until well into adulthood. By and large, a diagnosis is made after a physical examination of the genital area by a doctor and followup blood tests. Urine samples and blood tests can reveal abnormal hormone levels and chromosome analysis can confirm a diagnosis of Klinefelter syndrome.

Treatment
Most of the symptoms and complications involved with Klinefelter’s are treated in a similar way as individuals with low testosterone would be treated with hormone replacement therapy (HRT) like the daily application of AndroForte® 5% creams. If treatment begins around puberty, the chances of overcoming many of the complications are even higher. Men with Klinefelter’s that produce little to no sperm also have the option of assisted reproductive procedures that can aid them in fathering children, too.

For more information on Klinefelter’s and the treatments available, download this free brochure from TestoCreams.com. If you or someone you know has Klinefelter’s, please share with us how you are treating the condition, tips you might have for healthy living, and any other advice for other males with Klinefelter syndrome!


Testosterone in the News: Stress, Deep Voices, Women and T