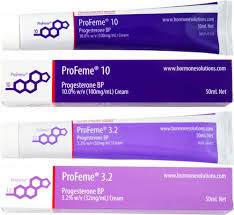 It is generally taken for granted that the onset of menopause is related primarily to the sharp fall-off in estrogen levels as women pass beyond their reproductive age. Usually, the decline in estrogen can begin in the early 40s. Still, there are no hard-and-fast guidelines as to when the level starts to fall off and how long the decline will take.

What’s now becoming more widely known is that many unwanted symptoms accompanying the passage into menopause are not purely related to the fall in estrogen levels. They can be just as much to the imbalance in the levels of the two most important hormones that control the reproductive cycle, estrogen and progesterone.

Contrary to what was a common belief, the main symptoms of menopause are not triggered purely by an estrogen deficiency, although the levels of estrogen do decline significantly during the later years of the reproductive age. More significantly, while estrogen levels are seen to decline by forty to fifty percent during the perimenopause phase (the three or so years immediately before and during the passage into menopause), during the same time, progesterone levels are seen to be falling by closer to eighty or ninety percent.

It’s therefore more appropriate to classify the cause of symptoms in menopause not so much as estrogen deficiency but instead as them being caused by estrogen dominance (or possibly as progesterone deficiency).

The term “estrogen dominance” should not be confused as being wholly due to a sudden excess of systemic estrogen, but rather is related to the skewed ratio of estrogen to progesterone.

It is the relative level of progesterone compared to the remaining level of estrogen that produces symptoms of estrogen dominance. The decline in progesterone usually starts as a woman approaches the later years of her reproductive age. It is caused by a malfunction when the follicles in the tissue of the corpus luteum released in an ovulation cycle, which is the primary source of progesterone, begin to lose some of their function. Typically, after twenty years of regular monthly periods, many of the follicles fail to function, which results in the relatively higher decline in progesterone production as women age.

As an end result,  progesterone levels steadily decline and the monthly ovulation does not always occur, creating a feedback loop of ever-decreasing progesterone. It is during this phase that what has usually been known as estrogen dominance develops. However, it could equally be termed progesterone deficiency.

Some of the symptoms of estrogen dominance match the typical complaints for perimenopausal women, such as irregular periods, and heavy menstrual bleeding, as well as the symptoms of menopause itself, which can include vaginal dryness, irritability or depression, hot flashes (or flushes), bloating due to water retention, weight gain, mainly on the abdomen, hips and thighs, sleep disturbances and insomnia, loss of interest in sex or discomfort during sex, headaches and fatigue, short-term memory loss and lack of concentration and mood swings.

Understanding the part played by progesterone during menopause is important, since estrogen dominance is one of the primary causes of these symptoms.

The most important thing to be learned from these facts is that addressing the level of estrogen on its own can have negative consequences. It has been known in the application of Hormone Replacement Therapy (HRT), which is intended to boost estrogen levels back up to pre-menopause levels, that unless it is accompanied by progesterone, there is a marked increase in the risk of breast cancer. However, there is not much talk about the need in HRT to keep the estrogen/progesterone ratio in balance so as to avoid estrogen dominance.

Here at Testocreams.com, we have had many years of experience in gathering relevant and helpful information that can guide women through many of the problems of reproduction and the passage into menopause. A valuable series of booklets is available on our website here, which covers many of the relevant aspects of hormonal imbalance, especially:

One of the most popular solutions to address estrogen dominance is the application of progesterone-enriched creams. ProFeme® Cream for Women is the only bioidentical, pharmaceutical-grade hormone cream on the market!

It is designed to restore your body’s natural progesterone balance and address symptoms of progesterone deficiency or estrogen dominance.

ProFeme® 10% is a bioidentical progesterone cream that works to bring your body’s levels of progesterone to their normal levels by battling estrogen dominance or progesterone deficiency.

ProFeme can be applied to any large skin area, such as the inner arms, upper thigh, or abdomen. Its full effects usually occur between four to six weeks of continuous treatment.


Side effects of some drugs may include Erectile Dysfunction