Testosterone in Women thinking outside the pill-box 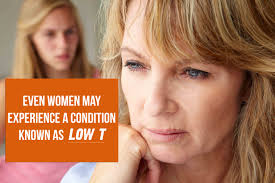 The world of medical therapy has become so incredibly complex over the past century that even highly trained and skilled physicians and scientists are forced increasingly to think in relatively conservative terms, using the “given knowledge” of established theory rather than being truly innovative and creative.  If this is true for such specialists, then how much more is it the case that we poor laymen are following their own trend, and thinking that “simple” answers are “right” without question.

Example:  talk to anyone about breast cancer, and their minds will automatically switch into “female” mode, since it’s a given that breast cancer affects only women.  But that’s absolutely not true; it’s just that breast cancer is rarer in men, but it is a known and highly dangerous condition.

This is also the case if you hear people talking about Testosterone, the hormone.  Now, maybe you think, as most do, that this hormone affects only men.  After all, the name itself is derived from the anatomical name “testes”, which is a purely male feature.  Think back a few years to the release of the “drug of the decade” Viagra.  It’s main claim to fame (and remember that discovery of this effect was wholly accidental) is to mimic the effect of testosterone in producing male virility.  But in fact, testosterone  is a steroid hormone found in the androgen group. It is derived from cholesterol (like all the sex hormones) and its immediate precursor is DHEA. Although it thought of as “the male hormone”, testosterone also plays important role in women.  Testosterone for women  is produced in the ovaries and the adrenal glands. The ovaries function to help produce testosterone even after menopause. Therefore, women who have their ovaries removed are at significant risk for decreased testosterone levels and the subsequent symptoms associated with it.

Testosterone in women has many functions. It is important for bone strength and development of muscle mass and strength. Testosterone also contributes to overall sense of well-being and energy level. It is best known for its crucial role is a woman’s sex drive or libido. Testosterone not only enhances the sexual mood of a woman, but the experience as well. Similar to other hormones, the onset of menopause cause the decline of up to 50% in production of testosterone  in women. This means less energy, brittle hair, less bone and muscle strength, and a diminished sexual drive. A hysterectomy and some prescription drugs can also result in lower levels of testosterone for women.

Even if someone does discover the perfect pill that will keep women lubricated, interested, and highly orgasmic, the chance that the FDA will approve that pill, if history is any indicator, is unlikely.

There is a sad example of “thinking inside the box” in the case of development of therapies for this phenomenon.  A very pointed article dealing with this unfortunate tendency inside the FDA was published recently by Dr Lauren Streicher MD.Â  As she says, thousands of women participated in trials for Intrinsia, and Libigel, two testosterone products intended for women that went before the FDA and were rejected since it was not felt to work well enough. In spite of a great deal of scientific data that demonstrates that many women would benefit from testosterone supplementation, there are currently no companies willing to risk additional millions to bring testosterone back to the table.

As she says, it’s hard to make an argument that the FDA is just being careful when you contrast the testosterone and flibanserin experience to the ease with which drugs get approved for men’s sexual health. There are 24 drugs that are FDA approved to treat sexual issues in men. There are 5 drugs that are FDA approved to treat painful intercourse in postmenopausal women. There are ZERO drugs FDA approved drugs to treat lack of libido. Only 3000 men were in the trial to get Viagra approved, but women’s libido drugs have been rejected despite huge numbers of women in lengthy trials highlighting that it continues to be very challenging for a woman’s (as opposed to a man’s) sexual health drug to get FDA approval. Many think this is more political than medical and that women’s sexual health is simply not taken as seriously as men’s sexual health.

And let’s not get too caught up in the sexual part of testosterone therapy.  It is a vital hormone in many ways, such as:

And what are the dangers.  In fact, they are few, and those that are cited are mainly “could” and “may” guesses, rather that scientifically proven by experiment.  When given in appropriate doses, there are no negative side effects. Excessive testosterone can cause acne, body hair growth and scalp hair loss in some women. Excessive testosterone supplementation, such as with anabolic steroids used by athletes, also tends to drop high-density lipoprotein cholesterol levels (HDL). That is the “good” cholesterol. Lower HDL levels increase the risk of heart disease.  But the levels that are being proposed in the current supplements for women are minute compared to the massive intakes that were notorious in the affected sports like weightlifting and cycling.

Coming back to Dr Streicher’s piece, there’s something you can do about this. An initiative called WISH (Women’s Initiative in Sexual Health) was established to raise public awareness about the importance of female sexual health, and to let government agencies know that women need therapies, research, and options. Leading women’s sexual health experts want to get a million signatures on a petition to let the FDA know that there should be as much emphasis on women’s sexual health therapies as the guys have had for years.

With every 1 ml of AndroFeme® 1% you receive 10 mg of bioidentical testosterone. At the recommended dose, each tube should last around 100 days making it very economical to purchase.


The Urban Definition of Low Testosterone